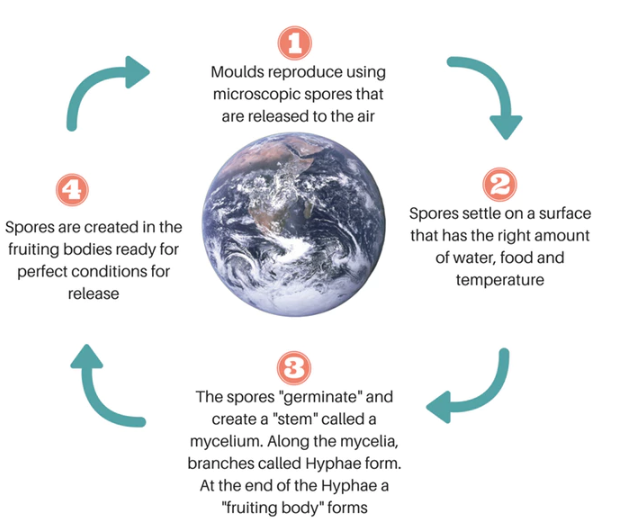 There are thousands of known species of moulds, which have diverse lifestyles. They all require moisture for growth and some live in aquatic environments.

What does mould live on?

Like all fungi, moulds derive energy through the organic matter on which they live. Typically, moulds secrete enzymes, mainly from the hyphal tips. These enzymes degrade complex biopolymers such as starch,  cellulose and lignin into simpler substances which can be absorbed by the hyphae. In this way moulds play a major role in causing decomposition of organic material, enabling the recycling of nutrients throughout ecosystems.

Moulds also synthesise mycotoxins and siderophores which, together with lytic enzymes, inhibit the growth of competing microorganisms. Moulds can also grow on stored food for animals and humans, making the food unpalatable or toxic and are thus a major source of food losses and illness. Many strategies for food preservation(salting, pickling, jams, bottling, freezing, drying) are to prevent or slow mould growth as well as the growth of other microbes

Although moulds can grow on dead organic matter everywhere in nature, their presence is visible to the unaided eye only when they form large colonies. A mould colony does not consist of discrete organisms but is an interconnected network of hyphae called a mycelium.

In artificial environments such as buildings, humidity and temperature are often stable enough to foster the growth of mould colonies, commonly seen as a downy or furry coating growing on food or other surfaces.

Mould thrives in a wide range of environments

When conditions do not enable growth to take place, moulds may remain alive in a dormant state depending on the species, within a large range of temperature

The many different mould species vary enormously in their tolerance to temperature, humidity and pressure extremes.

Why SAN-AIR works and is safe for humans

SAN-AIR is a natural plant-based product. Brilliantly crafted through years of research into a proprietary mixture that uses specific properties of the blend to address mould. This blend is a scientific breakthrough in organic chemistry.

There are no toxic chemicals in SAN-AIR.

We have independent university testing to prove our efficacy.

Get started with one of our core products

Previous Get your pet lover a very handy gift! Next With SAN-AIR free yourself from toxic solutions